The 2015 general election was a fierce campaign. Tight polls. Animated debates. Insurgent parties. The result, a surprise majority for the incumbent Conservatives.

A big part of the election was the arrival of Ukip as a major player in England and Wales as immigration became a key voter-motivating issue. Both were integral to the vote to leave the European Union in the 2016 referendum, and while they have dissipated as forces since, their legacy remains. Politicians (or, rather, Conservative politicians) still talk about immigration to a disproportionate degree, and Boris Johnson invokes the Brexit divide in the fight against Labour.

Yet in 2022 that Leave-Remain split isn’t as great as it used to be.

Immigration now ranks ninth in the priorities of the electorate, named as the most important issue by just 12 per cent of voters. Its decline is stark. The country is nowhere near as fixated on the issue as it was during the years of Ukip’s prominence. Even before the coronavirus pandemic became the most important political challenge, the country had moved on. 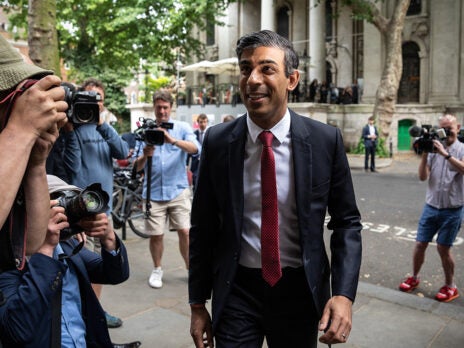 Rishi Sunak vs Liz Truss: who can rescue the Tory party’s poll ratings?

Yet the Conservatives continue to dedicate significant time and resources to the issue as if nothing has changed. Nowhere is this misplaced attention clearer than in the policy from Boris Johnson and Priti Patel of sending asylum seekers to Rwanda. This scheme is deeply divisive among the public and is unlikely to motivate many to vote for the Tories, but it has been championed by the government and the candidates for the party leadership have been competing to show their support. “I’d send more migrants to Africa,” bellowed the Mail, paraphrasing the words of Liz Truss. Rishi Sunak “would cap [the] number of refugees” according to the Telegraph, with no effort to explain how, or indeed why.

This might appeal to Tory party members and win the leadership race, but the obsession with demonising immigrants and refugees feels increasingly misplaced in the Britain of the 2020s. While we are on average more likely to be sceptical than progressive about immigration numbers, as a society we have shifted. Attitudes have softened since the heyday of Ukip.

Even before the referendum the share of Britons wanting immigration to be reduced by a lot was falling. Afterwards, that decline only intensified. At the height of the 2008 financial crisis more than 50 per cent of the country wanted immigration reduced significantly. Today that figure sits closer to a quarter, halved in 15 years.

In 2012 Brits thought more immigrants would mean negative pressures on the NHS. Now more Brits believe immigrants that will be a net positive for the NHS. In 2012 55 per cent of the country agreed that immigration would damage any economic recovery “by taking away jobs from people already living here”. Now that sentiment is shared by just 23 per cent of voters.

Consider all this for a moment. The “job-stealing immigrants” trope, once believed in by half the country, is now a minority view.

It can be hard to recognise a revolution when you’re living through it. But during and since the years of Ukip, British social attitudes have undoubtedly evolved in what could certainly be described as a revolutionary way. Immigration has fallen off the political radar for most voters. What matters now is the cost of living, and it is likely to stay that way until the next election. Immigration doesn’t motivate as many as it used to, and the overwhelming number who are motivated by it are already voting Conservative.

The voters the Conservative candidates are chasing in going hard on immigration do not exist in our modern politics. The median voter is not as obsessed with immigration as they used to be, nor as opposed to it. The belief that elections can be won on immigration is outdated. Truss and Sunak are chasing a phantom electorate.