Are you left-wing or right-wing? Centre or centre-right? Most Brits like to tell themselves they’re centrist, even the ones who, objectively, aren’t. Remember Nigel Farage bouncing onto the Question Time stage and declaring that his politics are “not left, not right, just common sense”. Feeling as if you’re in the middle of a two-sided argument can be comforting.

According to YouGov the average voter in 2006 was close to the dead centre, and as many voters identified with the right as with the left. Since then the average Briton has trended leftwards (albeit not by much).

Why does how voters personally identify matter? Who you place yourself next to on the left-right scale might signal that you are more likely to vote for them. When the average Brit identified as avowedly centrist, for instance, the country was re-electing Tony Blair, whom it also identified as centrist, as prime minister. (Amusingly, Blair’s average score in such polls sometimes put him on the centre-right rather than merely in the centre.)

YouGov has continued this series of polls and hidden among the data tables of its most recent survey is a guide to where voters and party leaders are perceived to sit today. Rishi Sunak, in a surprise to no one, is seen by the average voter as right-wing, whereas Keir Starmer, in what might be a heart-stopping surprise to some Labour firebrands, is seen as left-wing. Notably, however, Starmer is seen as less extreme than Sunak. 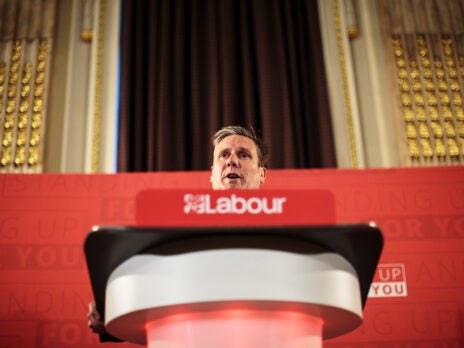 This is a telling chart. It comes as no surprise that Jeremy Corbyn is seen as the most radical party leader of recent history, but his opponent Boris Johnson is a close second, albeit obviously on the other side of the spectrum.

[See also: Most voters want the UK to rejoin the EU. But there’s a catch]

Today, while Sunak is regarded as a breath of fresh air by some liberal Tory MPs, he is viewed by the public as more extreme than David Cameron. Starmer’s rating on the left-right axis puts him closer to the average Briton than the Prime Minister and in between Ed Miliband (to his left) and Gordon Brown.

Rank the parties on the left-right scale and a curious gap emerges. Starmer is seen as more left-wing than the average Briton but the Labour Party itself is seen as even more so (by 17 points). During Corbyn’s tenure, the leader-party gap was just seven points, while under Miliband it was one and under Brown it was two.

This disparity between Starmer and Labour compares most closely to Blair’s ratings in 2006, when Blair’s average score on the left-right scale was +5, while Labour’s was -19.

Does this matter? I don’t know. Does a leader being seen as less radical than their party aid perceptions of strength or perceptions of weakness? Are they seen as strong for battling hardline factions or weak for potentially being manipulated by them? Whatever the answer, one wonders whether Labour’s differences with its leader will play on the minds of voters in elections to come.

Topics in this article : UK voters